Thank you for your patience while we retrieve your images.

Tempting Fate.. the Four Colour Ghosts first album.
First thing that has to be said, great rock tracks.. some real anthems.. the lads have done great.
Now down to the photography from start to finish.
The first two shots you see are the front and back art work, shot in The Rabbit Hole Studio.. my home studio.
Tempting Fate gave the concept of the cards, who knows what that card is going to be?
The following shots, some will be used for promo shots based around the album and one or two will be inside the cover of the CD. Along with these shot's, there will be some of my live shot's of the band on the inside cover to.
I wanted the band to look, cool, rock and roll and a bit dangerous.. an image that I hope we have achieved together.
Now go check out the guys.. well worth buying the album and great to see live.. The Four Colour Ghosts. 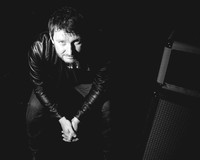